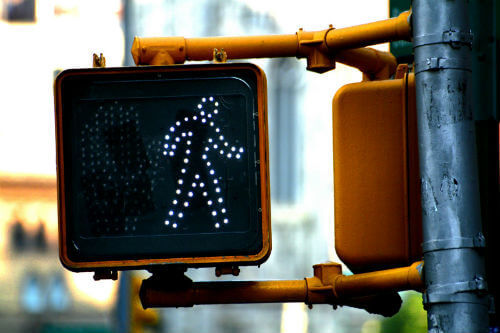 Police are looking for the driver of a vehicle that struck a pedestrian while leaving the scene of a street takeover in Anaheim recently. According to a news report in The Orange County Register, dozens of people had assembled after midnight near Harbor Boulevard and Katella Avenue where at least 15 vehicles were seen with their tires screeching as they skidded in circles through the intersection, police said. Authorities responded to break up this gathering and a red coupe was seen in surveillance footage driving away from the scene as police approached.

Investigators believe that the sports car struck a man who was standing in the street and then took off westbound on Katella Avenue. The victim was transported to a hospital and treated for injuries that were not life-threatening. He is expected to recover. The vehicle involved in the collision may have been a Scion FR-S or Subaru BRZ police said. It did not have a license plate displayed on its front bumper, but may have had one on its dashboard.

Police are asking anyone who may be able to track down either the vehicle or the driver involved in this crash to call the Anaheim Police Department. Officials say similar events in Orange County and the illegal exhibitions these events feature have attracted hundreds of vehicles and people.

What is a Street Takeover?

Street takeovers have become a growing concern and problem not just in Orange County, but also all over the Greater Los Angeles area. This is not quite street racing. But, it's really a matter of taking over a street or intersection for the purpose of doing stunts and getting attention on social media. In so doing, these street takeover obstruct traffic and put the public in danger. In Los Angeles, officials report that individuals have attacked police officers, ambulances, fire engines and people who are just trying to drive home.

Helpful Tip:
How Much Is My Car Accident Case Worth?

In one social media video, a man can be seen saying that he calls these types of takeovers "Sunday Fun Day." He boasts in the video that they "perform dangerous stunts" and "everyone loves it." He also goes on to make this troubling statement: "If we are really lucky, someone will get hit by a mother (expletive) car and make our video priceless."

These street takeovers usually occur at night. Typically, marijuana is distributed and individuals perform car or motorcycle stunts at the intersection, doing donuts and more, often running into members of the crowd and causing injuries. LAPD officials say bystanders are usually intimidated into not calling the authorities. In fact those who the perpetrators don't like are intentionally run into. Officers showed video footage of one person who called 911 and was subsequently hit by a car. And then, while he was bleeding from his head, he was pursued and beaten, officials said.

These street takeovers have continued despite the coronavirus pandemic and statewide stay-at-home orders. The Orange County Register also reports that the number of motorists who were caught going faster than 100 mph was 87% more during the first month of California's stay-at-home order than for the same period last year. This happened even as overall traffic has plummeted during the time of the pandemic. California Highway Patrol officials issued 2,493 citations to motorists accused of traveling at triple-digit speeds from March 19 to April 19. This major increase came as roads were deserted.

Helpful Tip:
Who Can Be Held Liable For Collision Injuries And Damages?

Increased speeds can, of course, increase the risk of violent, high-speed car accidents, which almost always result in fatalities. California Vehicle Code Section 22350 (Basic Speed Law) states: "No person shall drive a vehicle upon a highway at a speed greater than is reasonable or prudent having due regard for weather, visibility, the traffic and on surface and width of, the highway, and in no event at a speed which endangers the safety of persons or property."

Pedestrian accidents can result in many serious injuries. Here are examples are a few common types of car accident injuries:

Head injuries: Traumatic brain injuries – be it a concussion or a skull fracture – can cause complications far into the future. Even when treated properly brain injuries can cause long-term problems with brain function as well as issues with headaches, sleep, movement, memory, behavior and so on. Many brain injury victims may require lengthy rehabilitation and ongoing therapy.

Helpful Tip:
What If My Pain Took Time To Surface?

Whiplash: This is a common name for muscle, ligament, and tendon injuries that can occur in a car accident. The trauma that occurs during a car accident can strain muscles and other soft tissues in your neck causing what is known as "whiplash" injuries. This could be extremely painful and can inhibit your mobility and functioning. It can also be quite painful and take a long time to heal.

Fractures: Car accidents also commonly result in fractures or broken bones. You may suffer broken ribs in a car crash if you are pushed forward, backward or sideways due to the impact. Broken arms, legs, hips, and shoulders are common in a car crash. While broken bone injuries may not be life-threatening, they could result in chronic pain and the need for lengthy physical therapy.

Helpful Tip:
What Should I Know About Car Accident Claims?

If you or a loved one has been injured a car crash as the result of someone else's negligence, recklessness or wrongdoing, you may be able to seek compensation for damages such as medical expenses, lost income, hospitalization, cost of rehabilitation, permanent injuries, disabilities and pain and suffering. The experienced Orange County pedestrian accident lawyers at Timothy J. Ryan and Associates have a long and successful track record of representing the rights of injured victims and their families. Call us to find out how we can help you seek and obtain maximum compensation for your losses.